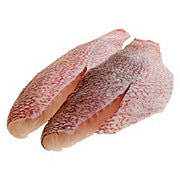 Several species are mis-labeled "red snapper" and sold in the marketplace for a high price. But that ain't cool. American Red Snapper is the only species that can legally be labeled as such. And thus, you will see the red skin left on to help verify it. This is Dayboat, wild-caught, Traceable American Red Snapper!

For several decades, American Red Snapper has been a prized fish for recreational and commercial fisherman. As a result, American Red Snapper was over-fished for awhile and became quite low in numbers. However, as American fisheries so often do, the management program enacted tough oversight, patrol, and a viable plan, and now the supply is returning with abundance and sustainability.

This is quite a prestigious fish!

The American Red Snapper filletsare sold in approximately 1 lb sizes. Choose how many pounds you would like from the Quantity Box during check out.